To share your memory on the wall of Clara Schales, sign in using one of the following options:

Receive notifications about information and event scheduling for Clara

We encourage you to share your most beloved memories of Clara here, so that the family and other loved ones can always see it. You can upload cherished photographs, or share your favorite stories, and can even comment on those shared by others.

Posted Jun 22, 2020 at 04:23am
Clara was residing in Kings Rehabilitation Center when my mom was residing there and she shared the same dining table for meals as my mom. My mother adored her and when I would visit she would always smile at me and give me a little wink when I would talk to her. She loved her sweets every meal time I was there. I told her” Sweets for the Sweet “..... I got the biggest smile. She loved my perfume and I sprayed some on her. I didn’t know her long, but she was special to me!! Rest In Peace Miss Clara.... I’ll miss you and your cute little hats!! 🌹🙏🏻
Comment Share
Share via: 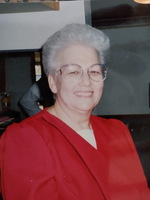