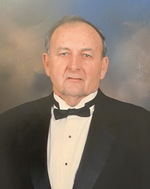 Darrell Eugene Torres was born on January 16, 1934 in Corcoran, CA son to Albert David Torres and Ruby Mae Bell. He is survived by his wife Christina Torres, 5 children David Torres, Patricia Coverick, Jeffrey Torres, William Torres & Jennifer Anderson, and siblings Dannie Torres and Vera Mae Whitlow. He has 15 grandchildren and 15 great-grandchildren with one more on the way.

He served in the United States Army as a mechanic during the Korean War and after worked as a stationary engineer in the laundry industry for over 50 years. Darrell spent most of his early years in Hanford, CA before relocating to Newark, CA with his wife and kids. He loved spending time with his family on his houseboat in Stockton and taking camping trips to the desert. Darrell spent his retirement split between California and Florida to spend time with his family on both ends of the country.

Darrell passed away on March 21, 2021 in Stockton, CA at the age of 87. He is preceded in death by his late wife Simone Rapp and daughter Vicki Hendricks.

He was a loving husband, father, brother, uncle, grandfather and friend. He will be greatly missed by all those who knew and loved him.