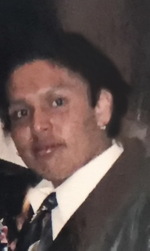 On January 25, 2021 Ramon Martinez started his journey to join his mother Paula Jeff and his grandmother Rosita Ignacio in the afterlife, at the young age of 34 years old.
Ramon is survived by his two brothers: Roberto and Jose, sister Gloria, two nieces, three nephews, Uncle Roger, Aunt Alberta, and many close cousins. He was a tribal member of the Santa Rosa Tachi Yokut Tribe. He was known to be a two-spirited individual who was extremely giving and had an unforgettable sense of humor.
A Graveside service will be held on Wednesday, February 3, 2021 at 11:00 A.M.at the Santa Rosa Rancheria Cemetery on 19th Avenue.