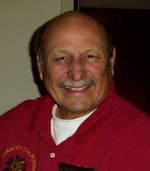 Ray “Sonny” Tarango was born on December 3, 1947 in Benson, Arizona and passed away on December 24, 2020 in Lancaster, Ca. Ray was preceded in death by his wife Peggy Tarango and his parents Reynaldo and Consuelo Tarango. He is survived by his siblings: Elisa, Gloria, Fernie, Julio, Robert, and Connie. He will also be missed by his many nieces, nephews, and cousins, who all loved him dearly. Ray was a Vietnam Veteran and was retired from the Carpenters Union. Ray traveled extensively across the United States for work and pleasure.

Ray was an avid golfer and a fan of the Kansas City Chiefs and the San Francisco Giants. He especially enjoyed playing golf with his nephews, including making friendly wagers and bragging rights for the winner.