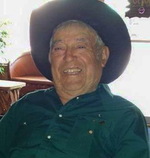 Roberto Cantu Martinez, Sr. of Lemoore passed away on Saturday, January 23 in Hanford at the age of 89. Roberto was born to Florencio & Clara Martinez in Santa Maria, TX. Roberto was a farm laborer and a very hard worker. He was known to his many friends as Beto Loco because he was known as a very funny man and always doing crazy things to make other people smile. He loved working on his tractor. At home he was the boss, even though everyone really knew his wife Celia was. He had a smile that lit up a room and was always full of laughs. He will be missed by everyone who knew him.
Roberto is survived by his wife of 69 years: Celia Martinez, 7 children: Bertha Allen and Andres of Lodi, Juanita Gonzales of Lemoore, Carmen Hall and George of TN, Mario Martinez and Tabitha of Tulare, Estella Escovedo and Leonard of Oceanside, Elida Poole and Chuck of MD and Yolanda Martinez of Lemoore, 15 grandchildren, 29 great-grandchildren, 3 great-great-grandchildren, 1 sister Anita Martinez of TX. He was preceded in death by his son Roberto Martinez, Jr.
Private services will be held.